The Business Leader Behind Pixar’s Epic Turnaround Story • Meditation and Philosophy Teacher • Expert in Workplace Culture and Burnout • Author, To Pixar and Beyond • Founder, Juniper Foundation

“What makes Mr. Levy’s contribution so insightful is not that he plows old ground in greater depth, but that he uses his personal story as vehicle to add a new dimension to these topics. Mr. Levy has quite a story to tell.” — The New York Times 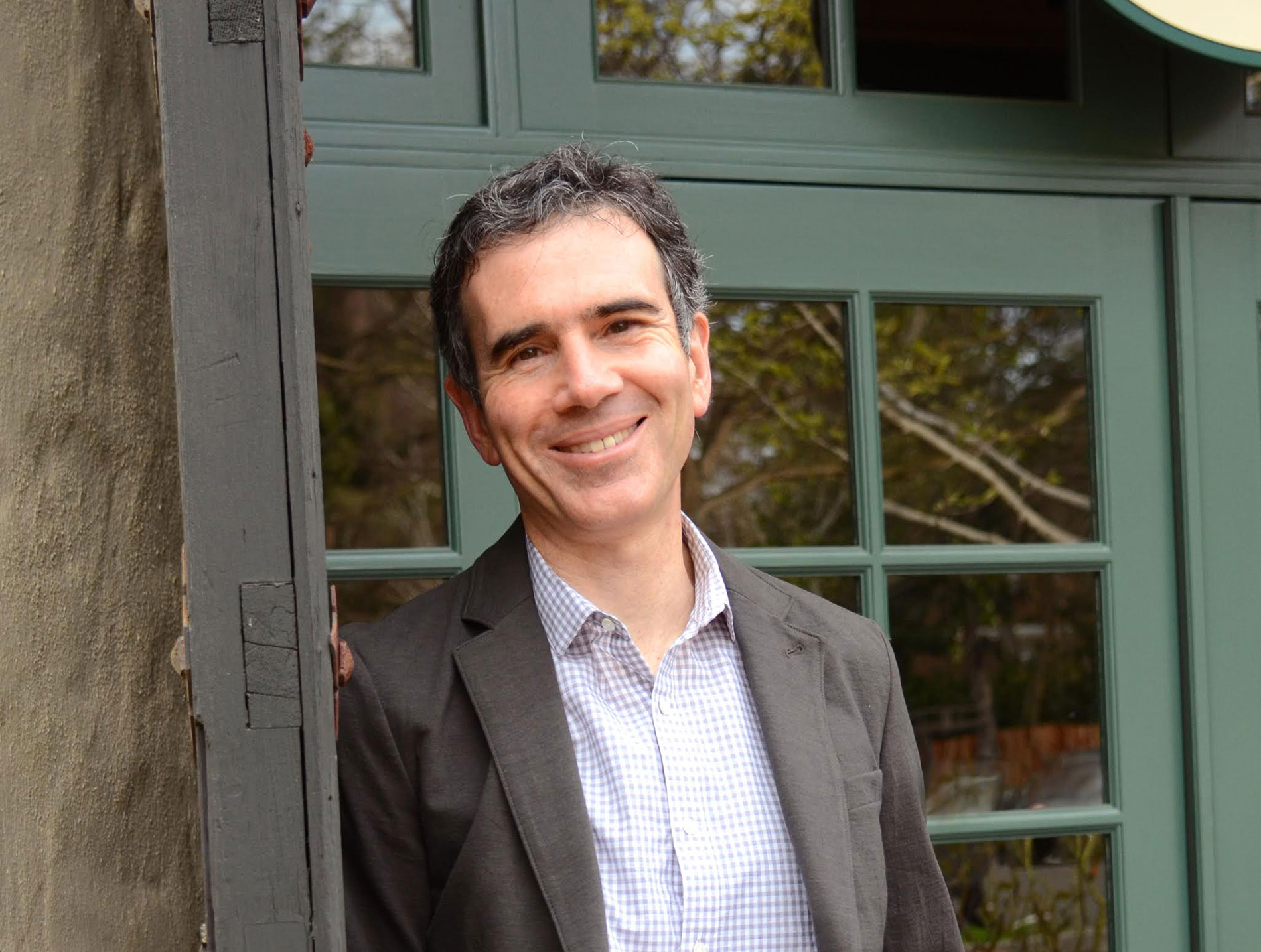 In 1994, out of the blue, Lawrence Levy received a phone call from Steve Jobs to see if he had any interest in running Pixar’s business. Over the next twelve years, Lawrence served as Pixar’s Chief Financial Officer, a member of its Office of the President and later as a member of its board of directors. During this period he developed and put in place the strategy that would transform Pixar from a money-losing graphics company into an entertainment powerhouse.

Lawrence then took a break from corporate life to pursue his passion for eastern philosophy and meditation. He came to see the power of these ideas for realizing our potential as individuals and for creating human-centered organizations that foster creativity, dignity, and excellence.

For the past twenty years, Lawrence has been dedicated to studying and practicing Buddhist philosophy and meditation with his teacher, Tibetan Buddhist master Segyu Choepel Rinpoche, and to understanding how these practices and ideas intersect with modern life. At its core, Buddhist ideas are a deep inquiry into the nature of the mind and reality combined with a system for unfolding the mind’s potential for wisdom, peace and joy. He believes these ideas and practices have enormous potential to help humanity in this time of revaluation and agitation, and to balance material progress with spiritual well-being, all without resort to dogmatic thinking or ideas.

In 2003, together with four co-founders, Lawrence created a non-profit called Juniper Foundation that focuses on bringing Indo-Tibetan meditation practices to contemporary life. He teaches meditation weekly and continues to write and speak on a range of topics including creativity and innovation, collaboration, realizing our potential, and building human-centered organizations.

In 2016, Lawrence released his first book, To Pixar and Beyond: My Unlikely Journey with Steve Jobs to Make Entertainment History, an Amazon Best Book of 2016 in Business and Leadership and A Fortune Magazine Best Book of 2016. The New York Times described it as “enchanting…Mr. Levy has quite a story to tell” and Fortune Magazine called it “an epic tale of Levy’s quest to balance the competing interests of the quiet artists and technologists who created Toy Story and the mercurial entrepreneur who controlled their professional fates.”

Lawrence lives in Palo Alto, California with his wife Hillary. He is an avid reader, with a wide range of interests including philosophy, economics, and science fiction.

The Great Opportunity: The New Future of Life, Work, and Connecting with What Really Matters

We’re living through a time like no other in history, where individuals are rethinking their relationship to work and life, and organizations have been given an opportunity to adapt to a new future that is anything but clear. We do know that the pandemic, the pressures of modern corporate life, the extremes of social media, and an always on, always available culture have brought us to a breaking point. Some call it the The Great Resignation, other call it The Great Reshuffle... Lawrence Levy calls it the Great Opportunity.

Throughout his career, Lawrence witnessed the pitfalls of modern corporate culture: how often they are driven exclusively by performance metrics, acquisition, and growth at all costs. Although that mentality still produces an enormous amount of prosperity, it also has hidden costs: stress, lack of fulfillment, and lack of self-worth. Lawrence could see that something was missing in this equation. After building Pixar into an animation powerhouse, he left  to study ancient Buddhist philosophy. Along the way, his eyes opened, his resistance dropped, and he began to see that the ideas in these traditions, discussed by these ancient philosophers and masters, are like a code. A treasure map to our own capacity to wake up and see the world in a whole new way.

In this talk Lawrence shares his journey through Silicon Valley, Hollywood and Buddhist meditation and philosophy, encouraging us to gain more perspective on our lives, to understand that there is more than one path through our challenges, whether organizational or personal, and that if we want to bring about meaningful change to our organizations and to our lives, we have to reach for it. Lawrence discusses the relationship between organizational culture and innovation, his view of mindfulness (hint: it’s good...but don’t overplay it), and what the philosophers he loves have to say about living our lives (hint: don’t make the quality of your life a side show...it’s the main event). “We all have the capacity to shine,” Lawrence says. “We just have to know how to turn the lights back on.”

To Pixar and Beyond: A Turnaround Story with Lawrence Levy

In this talk, Lawrence shares the never-before-told story of Pixar's improbable success together with his personal journey beyond Pixar. How does a company go from being on the verge of failure to one of the most extraordinary organizations in history? What are the secrets behind Pixar’s success? And how does it reinforce its organizational values, culture and brand on a day-to-day basis?

Lawrence shares with audiences his story of how he worked with Steve Jobs and the Pixar team to create a highly improbable roadmap that transformed the sleepy graphics art studio into one of Hollywood's greatest success stories, and how your team can benefit from these principles. Lawrence also shares insights from his personal journey and their relevance to our personal and professional lives.

Join Lawrence as he takes you and your team on an awakening and insightful journey to discover the powerful secrets of Pixar’s legacy.

Why is the working world under the siege of stress? Why does well-being feel so far out of reach for so many of us? In this renewing talk, Lawrence Levy introduces audiences to The Middle Way—a new (yet very very old) way of looking at where stress comes from, and how it can be overcome.

Drawing on ancient philosophies that are now being proven by neuroscience, Lawrence begins by explaining the two sides of our lives: the bureaucrat and the creative. When we spend all our time in bureaucrat mode (making sure we get through the day-to-day), we’re too focused on getting things done, and we may wake up one day and wonder if we ever truly lived. When we spend all our time in creative mode (living, loving, laughing, creating, and enjoying), we can lose momentum and become frustrated by our lack of success. When we’re stuck in either of these places, we’re stressed and agitated. That’s why we must turn to The Middle Way: a philosophy of harmonizing these two ideas.

Lawrence will share his strategies for achieving The Middle Way, drawing on real-life examples of organizations (like Pixar) and people who have been able to draw this fine line. When you achieve The Middle Way, says Lawrence, you can open the door to something new. You can build a great organization and live a great life.

The Challenges and Power of Collaboration

When a leader has self-confidence, they often have vision. They are innovative. They challenge the status quo. They change the world. But—self-confidence can sometimes lead to ego; to arrogance; to conflict. In this talk, Lawrence Levy presents the balancing factor: collaboration.

Drawing on the careers of famed figures including John Lasseter and Steve Jobs, Lawrence describes how a focus on collaboration can ensure an organization’s success. He talks about mastery and humility; listening and understanding; and the importance of selecting the right team of people. He provides strategies your organization can start using the very next day. Audiences will leave this talk inspired to commit to a new way of looking at and working with each other.

Lawrence’s Grand Rounds, "To Pixar and Beyond: An Unconventional Look at Culture and Narratives in Countering Burnout" struck a chord with the audience in helping healthcare workers understand and deal with burnout. It was described as “exceptional" and several people reached out to thank me for inviting Lawrence, mentioning how he had helped them think differently about their personal narratives and well-being; both in the hospital and beyond!

Lawrence Levy inspired our members beyond measure when he spoke to the NEXUS community about culture, corporate trends, the spiritual world and the inter-connection between the three. He is a truly gifted and engaging storyteller who brought warmth, compassion, humor, and decades of expertise to his presentation. His discussion of a radical shift in narrative towards collaboration and joy was especially meaningful to our audience, who were all deeply grateful for Lawrence’s time and now committed Lawrence devotees and fans.

Hands down, yesterday was the most inspiring moment of my career. I have never seen my students as engaged and driven to learn more than yesterday. It was the perfect storm! Lawrence’s passion and down to earth nature combined with a student body of 80+ students hanging on his every word and taking in every element of every story. Thank you, thank you, thank you!