“Per Aspera, Ad Astra” ("Through adversity to the stars”) 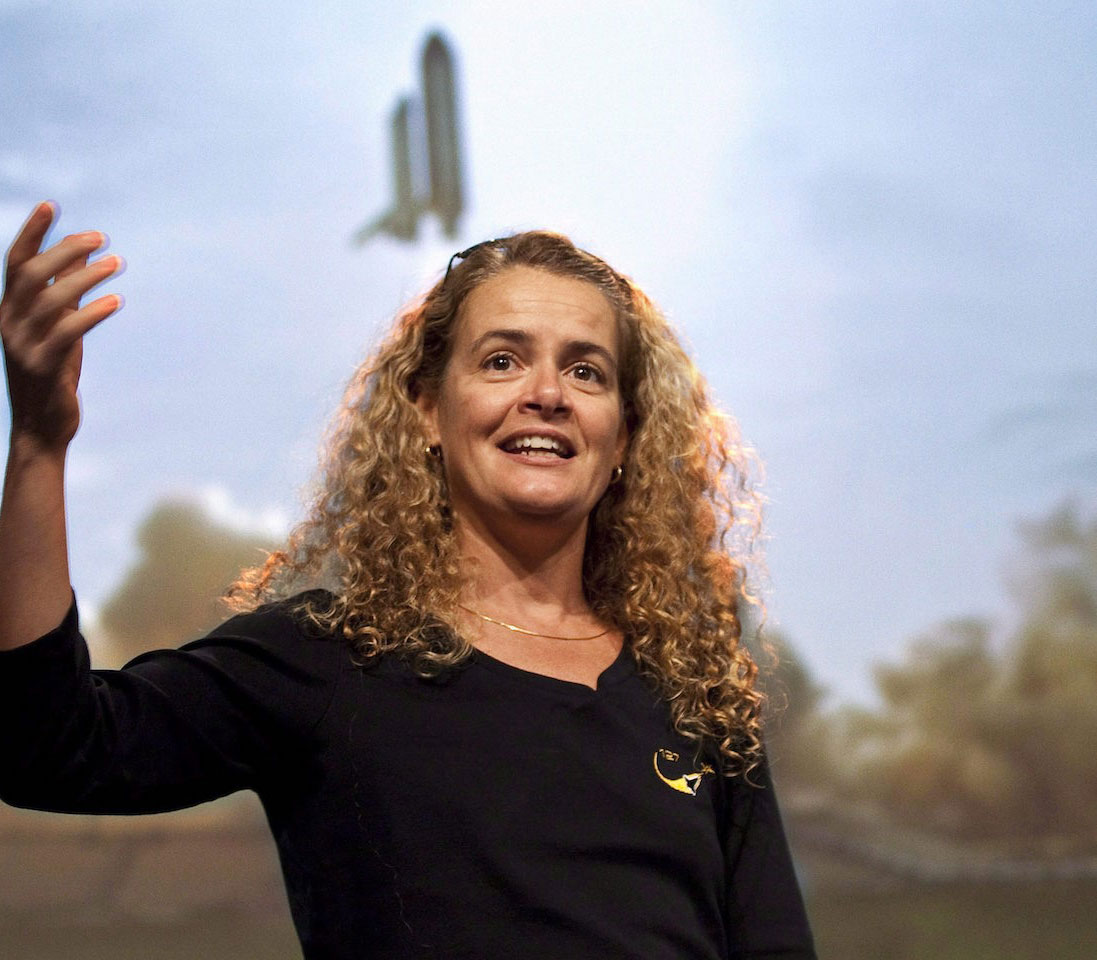 When The Right Honourable Julie Payette was 16 years old, a panel of interviewers asked her why she wanted to be an astronaut. “Wouldn’t you rather be a flight attendant?” they asked. Julie answered with an emphatic “no”—and became the first Canadian to board the International Space Station. In uplifting, inspiring talks, Julie shares her incredible story and provides valuable lessons on leadership, change management, and teamwork. “Anything is possible,” says Julie. She is proof positive that is true.

The Right Honourable Julie Payette is an astronaut, engineer, scientific broadcaster and corporate director. She was one of four people chosen from over five thousand applicants to become a Canada Space Agency astronaut in 1992. As a member of the NASA astronaut corps, she flew missions aboard the space shuttles Discovery in 1999 and Endeavour in 2009.

Julie was the first Canadian to board the International Space Station and to participate in an International Space Station assembly mission. Over the course of her career, she has served as a mission specialist, a flight engineer responsible for the station systems, supervised the spacewalk, operated the Canadarm, and helped to install scientific experiments. Julie has logged over 600 hours in outer space, covering 16.5 million kilometres and 402 orbits of the Earth.

She also served many years as CAPCOM (Capsule Communicator) at NASA‘s Mission Control Center in Houston and was Chief Astronaut for the Canadian Space Agency. Following her space career, she became active in the development of public policies and promotion of science and technology.

From 2011 to 2016, she was a scholar at the Woodrow Wilson Center in Washington DC, scientific authority for Quebec in the United States, and CEO of the Montreal Science Center. She also served on numerous public and non-profit boards, was a member of the women in sports commission of the International Olympic Committee and produced scientific outreach short programs on Radio-Canada.

Among a long list of awards and special honours, Julie was awarded NASA's Exceptional Service Medal, is an Officer of the Order of Canada, and has been awarded 23 honorary degrees by universities across the country. She is fluent in French and English, and speaks some Spanish, German, Italian and Russian. She plays the piano and has sung with the Montreal Symphony Orchestra, Tafelmusik Chamber Choir, and several others.

Julie Payette served as Canada’s 29th Governor General from 2017 to 2021. Ms. Payette is a member of the Ordre des ingénieurs du Québec and the International Academy of Astronautics. She has obtained an International Baccalaureate from the United World College of the Atlantic, UK, a Bachelor of Electrical Engineering from McGill University, and a Master in Computer Engineering from the University of Toronto.

Julie currently runs JP3A—with the "P3A" meaning Per Aspera Ad Astra (through adversity to the stars). She mostly helps boards and decision-makers from corporations plan technology transitions, business emergency preparedness, and information management. She also does briefings to help their teams improve versatility, security, and efficiency, and consider new technology like AI, upgrading their systems, or hiring a CISSP.

She is a commercial pilot and an accomplished musician. Julie Payette has received many distinctions and holds 28 honorary doctorates. She is a Knight of the Ordre national du Québec and a Companion of the Order of Canada.

Per Aspera Ad Astra: Through Hardships to the Stars

When The Right Honourable Julie Payette first started dreaming of becoming an astronaut, there were no female astronauts to look up to. In fact, there were no Canadian astronauts at all. Julie grew up to become the first Canadian to board the International Space Station and to participate in an International Space Station assembly mission. She flew missions aboard the space shuttles Discovery and Endeavour. She also completed training as a military pilot on the CT-114 "Snowbird" jet and holds a commercial pilot’s license. Not bad for someone who was once told to consider becoming a flight attendant instead of an astronaut. In this talk, sit back and let Julie take you on an incredible journey. As she describes her awe-inspiring career, she candidly reflects on the experiences and lessons that shaped her life. She reveals how she learned to face and overcome adversities, and shares her personal strategies for adapting to change. It’s an unforgettable keynote delivered by one of our most inspiring role models.